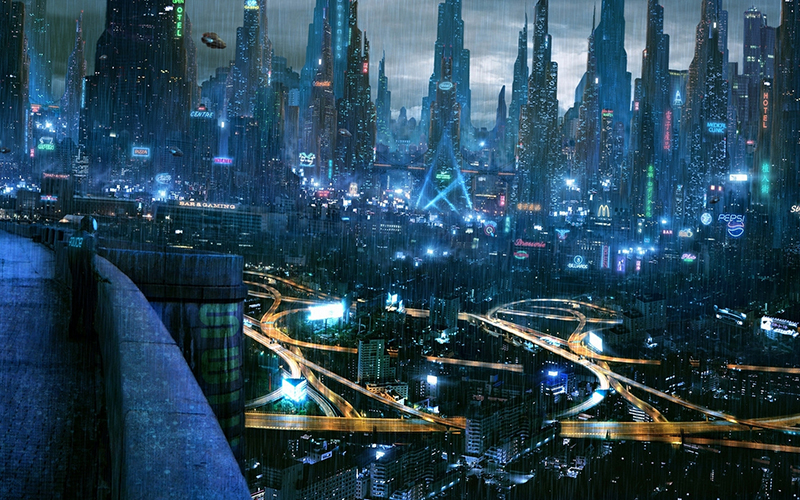 Frontier is a coastal city situated approximately 900 kilometers (560 mi) north of Perth, Western Australia. It lies at the mouth of the Frontier Canal, the world’s largest man-made canal. It is situated on the Indian Ocean. The popular Shark Bay world heritage area lies to the south of the town and the Ningaloo Reef and the popular tourist town of Exmouth lie to the north.

The city was built upon the ruins of a previous township of Carnarvon, which was purchased by an Agricultural consortium in 2022. Once the purchase was completed, the entire existing town ship was demolished, the site decontaminated and a new planned Corporate city built in it’s place.

The original portions of Frontier are now known as the neighborhoods of Central City and the Pinch. Over the years as the economic fortunes of the city rose, additional neighborhoods were added to the city, while some of the smaller nearby townships were purchased or annexed by the rapidly growing metropolis.

Frontier is an exciting and vibrant place to live. It is even more fun to visit. It is world famous for it’s local tourism. Nearly three million tourists, conventioneers and corporate travelers every year.

The city boasts modern motorways, rapid transit systems, its own Net LDL, and a corporate center boasting over a dozen of the worlds most powerful megacorps. Frontier is a shining example of Technology triumphant over the troubles of the past.

It is the fourth largest urban center on the continent. It is positioned adjacent to Bellamy Ridge, a naturally mineral rich ridge that provides a significant portion of Australia’s Rare earth and Salt supplies.

Frontier’s City government is a Democratic Mayoralty, with a corporate controlled City Council. The Mayor’s position is determined by popular vote. The City Council is comprised of representatives chosen by the ten largest (in terms of per capita taxes paid) mega-corporations in the city.

Frontier’s Economy is a diverse one, ranging from mining, manufacturing, fishing, agriculture, shipping, technology and tourism. This diversity has proved to create a strong stabilizing force in local economics. Some of the major financial undertakings in the area are as follows:

Frontier has a warm semi-arid climate. Average yearly rainfall is 226 millimeters (8.90 in) with the rainiest months (and the most reliable rainfall) being between May and July. Occasional tropical cyclones affect Frontier during the summer months bringing heavy rain and strong winds. Apart from this erratic source of rainfall summers are normally dry. Temperatures range from an average maximum of 33 °C (91 °F) in February to 22 °C (72 °F) in July. Average minimums are 23 °C (73 °F) and 11 °C (52 °F) respectively. On 6 March 2047, Frontier equalled the record for Australia’s hottest March temperature with a maximum of 47.8 °C (118.0 °F); this temperature had previously been recorded in the Western Australian town of Roebourne on 4 March 1998.

Due to its location the number of heavy inversion smog days or acid rain days are exceptionally scarce. While the occasional high-pressure front stalls over the city periodically, this is the exception rather than the norm. Most rainfall approaches the city from the western Indian Ocean, significantly reducing any opportunity for acid buildup in rainfall descending on the area.

Special operations flights to Brisbane, Sydney and Newcastle are intermittent and subject to last minute cancellations. It is recommended for individuals traveling to these destinations confirm their flights regularly. LEO flights to New Delhi, London, Paris, Frankfurt, New York, Tokyo, Washington DC, Johannesburg and San Francisco operate three times daily. Suborbital flights to Crystal Palace, Mojave Orbital Facility or the H2Soy Moonbase are available on a charter basis. Security on all flights is at the passengers own risk.

The Frontier International Airport is also a terminal for the Pan-Australian Airways’s new Phoenix-class Aero-zeps. These floating leviathans offer comfort and security unavailable on other air service carriers. With tight boarding security, this is the choice of the traveling elite. Flights leave once a week for Hawaii, Tokyo, Washington DC, and New York City.

In addition to passenger service, dirigible air cargo offered a less expensive alternative to traditional heavy lift and transport providers. These cargo flights are available for charter and can be chartered at the Pan-Australian Airway Cargo Hanger.

Frontier is also an end terminus for the Transcontinental Maglev line. This line connects Canberra and Frontier and is a non-stop trip. It arrives at Frontier daily at 6:00 am and 12:00 am, leaving at 12:00pm and 6pm. Additional lines run from the central Maglev station in Frontier connecting the city to Adelaide, Darwin and Perth.

The Frontier Ferry runs between Ross Cove and Bastion, departing every 30-minutes, and running around the clock. A second ferry service operates between Port Lee and the Sable Channel Islands.

Frontier is located along a number of major motorways. These include the M-3, M-7, M-9, M-11 and the M-16 Motorways. As a general rule, these motorways are open to free transit by civilian vehicles. recent activities of marauding Bikie Gangs, Nomad Packs, and other highway pirates has been on the increase, making this mode of transportation risky at best. Travelers leaving the greater Frontier Metropolitan area on these routes are advised to check all travel advisories prior to departure from controlled zones.

All public hospitals in Frontier are owned and operated by the Frontier Hospital Authority (FHA). These hospitals are available to all citizens and visitors to the city. As these are public funded institutions, individuals visiting these facilities are recommended to expect long waits prior to receiving medical attention.

In addition to the (FHA) operated facilities, a number of private hospitals, clinics and cyber clinics are available to facilitate medical services. However, these private facilities can something be very expensive and often require payment in advance or specialized financing.

For Information on the many individual neighborhoods located in Frontier, see Frontier Neighborhoods. 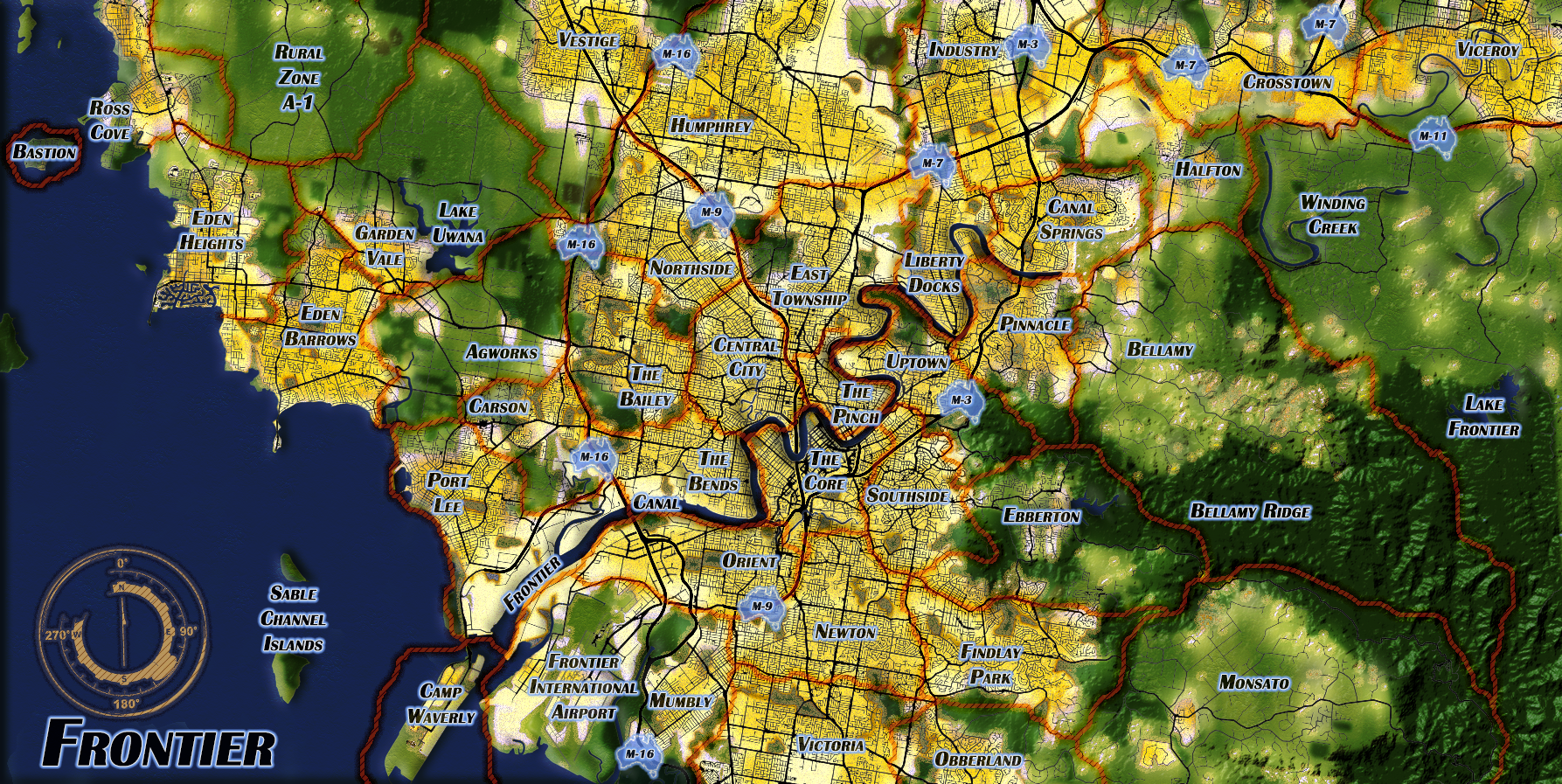 by: Nicesociety
See All Pages