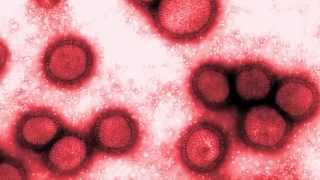 The Sidney Recombinant Virus, also called SRV, or Sydney RV, is a bioplague that first appeared in Sidney Australia in 2048. The virus was believed to have been developed in a Chinese bioweapons facility and deployed by Chinese forces during the Battle of Sidney.

The Sidney RV rapidly spread among the trapped civilian population of the city and through the ranks of both the Australian and Chinese forces fighting in the area.

The rapid onset and high fatality rate quickly brought an end to the Pacific Conflict. The arrival of the virus on mainland China set off a biological catastrophe unlike any other.

Since the Virus appeared, nearly 50 million Chinese and 5 million Australians have died as a result of the bioplague.

Currently all travel to and from Australia requires a detailed blood screening and mandatory 10-hour quarantine. The infectivity of SRV can be suppressed as long as the infected individual remains actively on a Novocain B regimen.

There is currently no cure for SRV, although the suppressant allows the infected to function normally. At this stage, SRV is always fatal once contracted.

The symptoms of SRV include:

by: Nicesociety
See All Pages